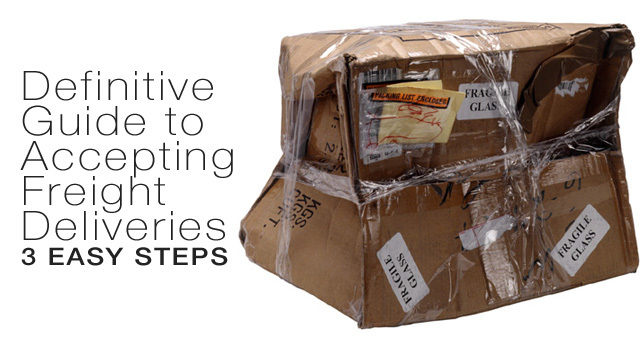 How Do I Accept a Freight Delivery? It's a simple question. You're likely asking because you're inquisitive, a control freak (we get that), or you've had a bad experience in the past. In truth, accepting a freight shipment shouldn't be a huge deal. (It's not like trying to explain how or why Kim Kardashian is "famous!") But its increasing clear that LTL trucking companies are determined to be the last ones to accept that they don't just deliver to warehouses anymore. So here's your Definitive 3 Step Guide to Accepting a Freight Delivery:

1. Only buy from companies you trust - Bottom line is that there's a lot of parties involved in shipping merchandise and you need at least one of them actually committed to ensuring you're completely happy. Here's a typical case: you order from awesomeplace.com, who uses Mediocre Warehousing to actually fulfill the order. Mediocre Warehousing ships your order via Awful Trucking (they're almost all awful on some level). There's no need to bore you with the intricacies of legal liability, logistics and whatnot. Mediocre Warehousing and Awful Trucking don't answer to you. You need to be 100% certain that awesomeplace.com does. Read their shipping terms on their web site. Call them and ask about shipping damage. If they don't have direct answers, that's a red flag that makes steps 2 and 3 even more crucial. 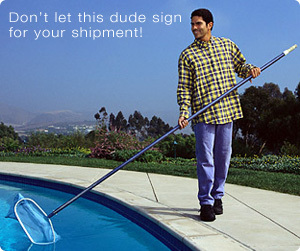 2. Inspect the shipment! - Look over every side of every box (pro tip: they usually have six). If the box looks dirty, dented, smushed, dinged, whatever, ask the driver if you can open it. If he says "no," assume it's damaged and proceed to step 3. Don't ask your pool man to accept the delivery. Don't leave a note for the trucking company to drop it in your yard. Use your head! You've ordered something cool. Something so big it has to ship with a freight carrier. Be there to accept it. It's sort of like watching Santa come down the chimney, only this Santa sometimes damages your stuff and tries to get away with it...

3. Refuse anything that's damaged. Seriously. - It's your call depending on how much you trust where you bought whatever you're inspecting, but definitely refuse any damaged boxes. Refuse the whole shipment if it's easier. Sometimes a delivery driver will try to assuage your fears and ramble on about some solution... it doesn't matter. Unless he's paying for anything damaged, ignore him. His job is to deliver. Your job is to inspect and accept only what's good. Some drivers act like they have a direct line to awesomeplace.com. They don't. You're about to sign a legal document taking possession of your stuff. Don't sign for what's not right. If you're refusing something, just write "Refused X box(es)." Don't write an essay. Don't describe the damage. Either one opens the door for argument. Just write how many boxes you're refusing; there's no disputing that. Refusing some or all of a shipment gives you immediate recourse with your credit card company. (Just in case awesomeplace.com turns out to be crappyplace.com...) Pro tip: Signing "accepted with reservations" (or similar nonsense) is completely meaningless and ineffective.

It's worth mentioning that every once in a while, around 0.1% of the time, your shipment might have "concealed damage." In layman's terms, that's damage the manufacturer or trucking company almost definitely caused, but you can't prove it. Which is why we really believe that step 1 above is the most crucial! Guess which company ships modern furniture all over the country, and even replaces "concealed damage" at no charge to you. We do!