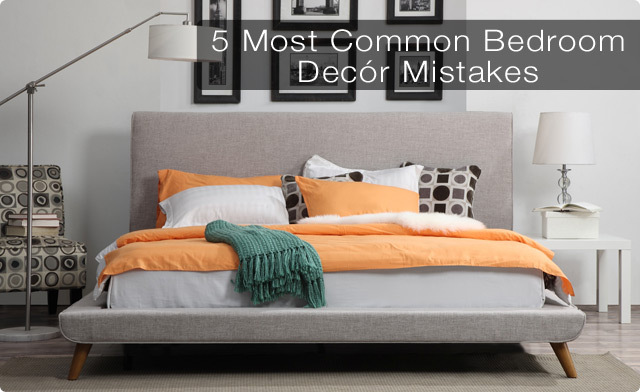 As fans of modern furniture and mid-Century styles in general, we sometimes get wrapped up in the "lines" of a particular piece of furniture, and lose sight of the bigger picture: how should this room feel? Today we'd like to visit the bedroom, and talk about common design mistakes that overlook the actual purpose of your modern bedroom. Whether you're a night owl or early bird, creating a peaceful, restful space in your bedroom is a key component to getting a good night's rest. And, in our opinion, a good night's rest opens the door to significantly better days!

Here are the Top 5 mistakes we see people make when decorating their modern bedrooms:

5. Facing Your Bed At the Door

Despite every decorating show on television co-opting it to mean something different, the philosophy of feng shui originated in China more than 4,000 years ago with the belief that you should be harmonized with your surroundings. It's a beautiful sentiment that we realize, for some, sounds pretty... crunchy? If that's you, bear with us. We're not asking you to say oms before you go to bed, or replace your steak with tofu. Traditional feng shui considers how your "energy" flows, with doorways considered connectors between each space. If, as you lay on your bed, your feet are aimed at a door, feng shui says your energy is pulled during the night towards the door, leading to a less restful sleep. (We can hear some of you snickering.) 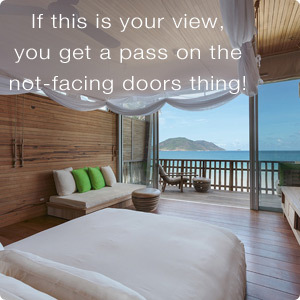 Whether or not you agree with that, practically speaking, there's a few other reasons your bed should be pointed somewhere else. First, privacy. We'll leave that one alone. Second, nearly every design element in a bedroom should be geared towards creating a calm, restful space. Frankly, you don't want to be falling asleep and waking up to a hallway full of kids, or other distractions. Unless you've got a view like the one at left, you might find your sleep more restful with your bed facing a piece of art, photo or sculpture. And while we're on the subject of walls, let's get to mistake number 4...

Obviously, we're generalizing here! Color is both highly personal and subjective. In fact, how you perceive and react to color is even affected by your culture. But, there's a lot to be said for how colors can affect our moods. Even ancient cultures believed colors could physically affect us. The Egyptians and Chinese used different colors to treat different physical conditions, using red to stimulate your body and mind, and increase circulation. Now, guys, we know what you're thinking... But modern day research shows that red can negatively impact testing performance. We're thinking increased circulation and poor performance aren't the best combination! Generally, we're of the belief that sleep should be restful and increased circulation, um, isn't. 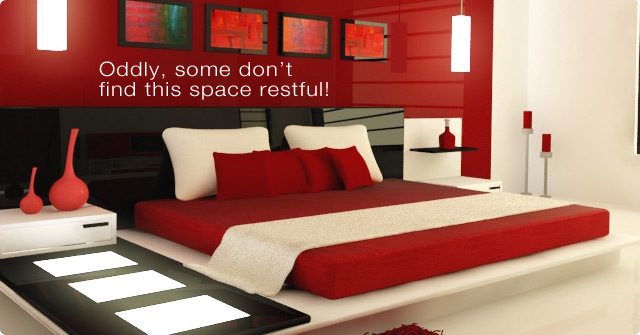 In truth, there's really not a lot of research out there relating to color psychology, but here's what's generally accepted: Red, orange and yellow are universally considered "warm" colors, and they can evoke emotions from comfort to anger and hostility. Blues, purples and greens, considered "cool," typically create feelings of calmness, or even sadness and indifference. Also, recent research has found another surprising affect of red: it causes people to react with greater speed and force. Again, not exactly what we'd consider restful. Coupled with the negative impact on testing, and general consensus that red is an "angry" color, and we recommend steering clear of it for your bedroom walls. Choosing neutral and subdued tones are more likely to create that restful space you need.

We get it. Heck, we do it! It's easy (really easy, actually) to get a little too matchy matchy when it comes to selecting furniture. But your bed, nightstands and dresser don't have to look like they were carved from the same block of wood. In fact, they don't have to look like they came from the same anything. Want a suede leather bed and purple dresser? Do it! Thinking about a grey bed, yellow nightstands and walnut dresser? Go for it! We're not saying you can't match all of your case goods, but you would be surprised how much personality and interest you can incorporate into your modern bedroom by switching things up a little... Here's a few examples: 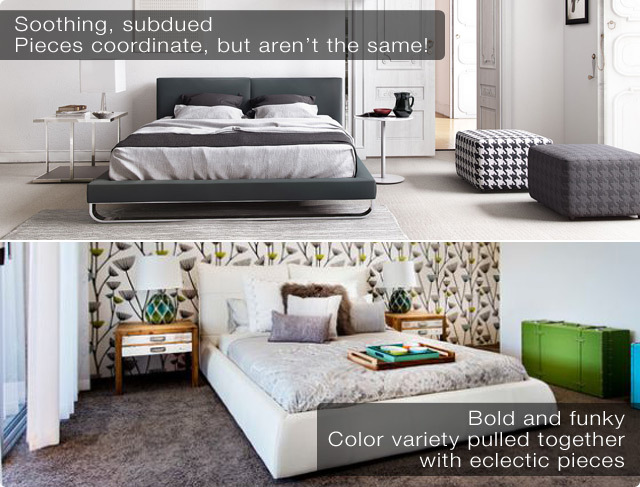 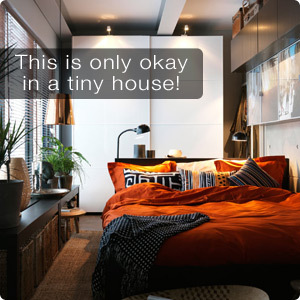 Everyone wants a king size bed, and huge closet to fit their couture wardrobe handmade by Coco Chanel and Donna Karan (both, of course, your personal friends). But, let's face it: that's not exactly where we all end up! Creating a restful sanctuary might involve some trade offs, but one of them should not be space to move around your bedroom. If you can't fit a king size bed, consider a California King or queen, both of which are narrower than a standard King. If a huge dresser is going to dominate the room, try something smaller paired with a storage bed. This will enable you to store your off-season clothing while leaving space for your room to feel open and airy. Tripping through your crowded bedroom; not restful.

And the number one mistake people make when decorating their bedrooms: putting stuff in there that runs counter to sleeping! And the number one distraction we find in bedrooms? Televisions. There's mounting evidence that televisions, IPads, phones - any screens really - seriously disrupt your sleep in myriad ways. Screen time before bed makes you less likely to fall asleep when you're tired, makes your sleep less restful, shortens your REM sleep, and (if it wasn't obvious) impacts how awake and alert you feel the next day. Start compounding those effects, day after day, and it's no wonder you feel tired! To put it simply: a television in your bedroom is a terrible idea!

And indulge us for a quick rant on the subject of bedroom distractions: Unless you're an ultra runner, you don't need a treadmill in your bedroom! That's a recipe for guilt - its presence in your bedroom isn't suddenly going to transform you into Jackie Joyner-Kersee. Sorry, that's #RealTalk. Obviously, this rule extends to any exercise equipment. Fitness is important, so is a restful night's sleep. In fact, if you're serious about fitness, you should be serious about sleep too!

To Sum It All Up

In a nutshell, when it comes to decorating your bedroom, the easiest question to ask is "does this make the space more restful for me?" If the answer is yes, you're good to go. If the answer is no, go a different direction...